The title of this song: “The Non proposal of Marriage” suggests a cynical view of the relationship of a man with a woman. In fact, the song is a sincere love song, in which Brassens expresses to his lifelong fiancée, Joha Heiman, his deep appreciation for her role in their very successful and very individual partnership.

1) It was for Cupid, the God of love, to aim his arrows himself. Love should be spontaneous and it is a sacrilege for people to think to arrange things for themselves.

2) perd son latin – The phrase « J’y perds mon latin » means « I am completely baffled by it ». Brassens uses this image to conjure up the mental decline caused by domestic chores and it is humorous as the Goddess of Love was a Roman Goddess.

3) Effeuiller la marguerite. Plucking the petals of the oxeye daisy is a game that lovers play, while saying “She loves me – she loves me not.”. Another image to suggest the adulteration of love by domesticity.

A modern group has made a very sensitive and expressive recording of this song on their album « Catalina Claro et ses amis chantent Brassens ».

Listen and admire this rendition sung by:
Catalina, Michel Maestro et Eduardo Peralta.  (Unfortunately I have no video.) 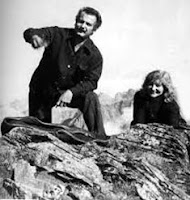 Georges Brassens and Joha Heiman shared each other's life, doing a lot of things together, but they lived apart in their separate homes. They had regular telephone conversations and called around to see each other frequently. She went on tour with him and stood in the wings during his performances, keeping an eye on everything. Their’s was a personal and a professional relationship but certainly not a domestic one. They each had their own space, which could be described perhaps as their Saturday of Mélusine.

Georges Brassens is reported as saying of his "Puppchen" that she was not his wife, she was his goddess. On her death in 1999, she was buried in the grave of Georges Brassens.

Further Information about Joha Heiman
There are a number of songs that Brassens wrote about Joha on this site. One of these is "Je me suis fait petit" and my posting of this song got me in discussion with other bloggers.As a result there is now much more detail about Joha and about her relationship with Brassens there, which I and other bloggers have written after the song. If you wish to look at it, the following title is the link: Je me suis fait petit

The day after I posted this song, I read in the Times of the rise in the number middle-class, middle-aged couples, who choose to "live apart together".

Click here to return to the full index of Brassens songs on this site
Posted by David Yendley at 00:04

My testimony of Getting ex back after a breakup
My boyfriend of a 4year just broke up with me and I am 3 weeks pregnant. I have cried myself to sleep most nights. Sometimes I stay awake almost all night thinking about him and start to cry all over again. Because of this I end up not having energy for my next day’s classes, my attendance has dropped and am always in uni and on time. Generally he is a very nice guy, he ended it because he said we were arguing a lot and not getting along. He is right we’ve been arguing during the pregnancy a lot. After the break up I kept ringing him and telling him I will change. I am in love with this guy and he is the best guy I have ever been with. I’m still hurt and in disbelief when he said he didn’t have any romantic feelings towards me anymore that hurt me faster than a lethal syringe. He texts me once and then mainly to check up on how am doing with the pregnancy, he is supportive with it but it’s not fair on me, him texting me as I just want to grieve the pain and not have any stress due to the pregnancy. I was really upset and I needed help, so one day I came across a website that suggested that Dr. Imoloa can help solve marital problems, restore broken relationships and so on. So I felt I should give him a try. I contacted him and he told me what to do and I did it then he did a spell for me. 2 weeks later, my boyfriend came to me and apologized for the wrongs he did and promise never to do it again. Ever since then, everything is back  to normal. I and my boyfriend and I are living together happily again. Dr. Imoloa as it is a place to resolve marriage/relationship issues, do you want to be sure if your spouse is being faithful to you or Do you want your Ex to come back,  happy marriage love spell, unable to get pregnant, Loto Spell, protection spell, traveler spell, job spell, attraction charms, extreme protections and so on. Contact him Via Email-drimolaherbalmademedicine@gmail.com / Whatsapp- +2347081986098. Website- drimolaherbalmademedicine.wordpress.com

Thanks for this great endeavour! Let me me give my two cents to help refine it.
I suggest you modify the translation and footnote about "Venus se fait vieille, souvent...". In fact, it should be read as: "Venus se fait vieille: souvent, elle perd son Latin devant la lèchefrite". Nothing to do with mental decline due to repeated domestic chores. The idea is that Venus, being an very old goddess, struggles to adjust to "modern" kitchenware (here, the dripping pan of an oven). A very Brassens-ish way of saying that love is put off by domestic chores and their practicalities.

I can't thank you enough for this great translation. This song means the world to me. It was one my parents favorite songs and described their unusual relationship. The were non-married for 40 years. They had planned to celebrate their 40 years of a non-marriage proposal in 2007 but my father died earlier that same year. I was born the same night my mother saw Georges Brassens in concert in Brussels in 1970. I have Brassens in my blood in so many ways. My son and husband do not speak French and with this translation I hope to expose them to the brilliance and humor of Brassens and the beauty of French.